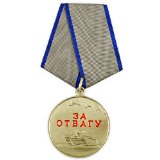 medal COPY 'For Courage' (Chechen campaign) high quality material - metal Works great as a gift! "The Medal for Courage was created by the decision of the Presidium of the Supreme Soviet of the USSR on October 17, 1938. It was awarded to soldiers of the Soviet Army, Navy, border and internal troops and other citizens of the USSR, as well as to persons who are not citizens of the USSR, for personal courage and bravery displayed in battles against the enemies of the socialist fatherland, while protecting the state border of the USSR, during the performance of military duties in circumstances involving a risk to life. The first three Medals for Courage were awarded only three days later to three border guards for acts of bravery during the Battle of Lake Khasan. More than 4,2 million were awarded during the Great Patriotic War. From its creation in 1938 to the fall of the Soviet Union in 1991, 4,569,893 medals were awarded, many posthumously. By Presidential Decree № 442 of March 2, 1994, the medal for Courage was retained by the Russian Federation after the dissolution of the Soviet Union, with the same basic design save for the caption ""USSR"" (Russian: CCCP) on the lower obverse. Its award criteria were amended on three occasions by three separate Presidential Decrees, № 19 of January 6, 1999, № 444 of April 17, 2003 and № 1099 of September 7, 2010. By Decree of the President of Russia of November 13, 1993, the first recipients of the Russian Federation Medal for Courage were soldiers of the 3rd Separate Special Purpose Brigade of the GRU, for performing special combat missions in the Republic of Tajikistan." Made in Ukraine