A quick glance at MED's discography shows many classic releases from years past: Madvillain's Madvillainy, Madlib's Shades of Blue, J Dilla's The Shining, Lootpack's Soundpieces, Quasimoto's Unseen. Each appearance showcases his well-rounded knack for lyricism, ranging from vivid street imagery to nostalgia to everything in between. It's fitting that he calls his new album Classic. With the sophomore album, fans are treated to collabs with label mate Aloe Blacc, Talib Kweli ("Classic"), Hodgy Beats (OFWGKTA), and with producers Madlib, Oh No and The Alchemist. MED speaks on the meaning of the new album's title, "I called the LP `Classic' because that's the approach I took: create music that has the potential to be played by every generation. This album deals with current issues, personal and within the community. Good-feeling music will always last and allow hip-hop to grow. Even though I recorded well LP was to do the music that I love to do but at the same time show growth." 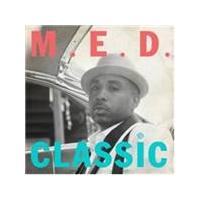