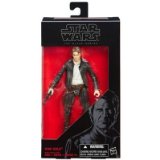 Detailed 6-inch figure looks like Han Solo from Star Wars: The Force Awakens Play with the included accessory Expand and enhance Star Wars collections Includes figure and accessory. Re-create the biggest battles and missions of the Star Wars saga with these figures from The Black Series! With exquisite features and articulated movement, the figures in this series embody the quality and realism that Star Wars devotees love. This 6-inch-scale Han Solo figure is carefully detailed to look just like the heroic character from Star Wars: The Force Awakens. Han Solo was many things over the course of his long and legendary career. Hunted as a criminal and fugitive, and lauded as one of the greatest heroes of the Rebellion, he was perhaps most renowned for his skills as a pilot. This figure is crafted to display true-to-story detail and comes with an accurately decorated accessory. Act out favorite battles or create brand new ones! No collection -- or adventure -- is complete without this Han Solo figure. Build up an epic collection with all the figures and vehicles from The Black Series. Star Wars products are produced by Hasbro under license from Lucasfilm Ltd. Hasbro and all related terms are trademarks of Hasbro.

This is an awesome figure and is currently very hard to find. It is part of Wave 5 of the Force Awakens phase (phase 3) of Hasbro's Star Wars Black Series Line. As of the time of this writing, wave 5 has only appeared on the shelves at various Walmarts in just a handful of states and is estimated to get a wider release starting February (hopefully). Other than on eBay, it has not been sold online and its rare availability at retail stores means that it is currently commandi..
strugglebuggy (Chicago, ..
( 10/12/21 )