In the spring of 1944 the Red Army finally pushed the fascist invaders back into their own territory on the southern front. Now the Romanian people would be liberated whether they wished to be or not. The 2nd and 3rd Ukrainian Fronts launched an offensive aimed at rolling up the German and Romanian armies of Army Group South Ukraine. Army Group South Ukraine: Battles in Bessarabia 1944 is a supplement for the Panzer Grenadier series. There are 10 scenarios or separate game situations based on the battles of April 1944 between the divisions of the Soviet 2nd Ukrainian Front and those of the German 8th and Romanian 4th Armies mostly the elite Grossdeutschland Division. This module is not playable by itself but requires ownership of Eastern Front Road to Berlin Battle of the Bulge and Elsenborn Ridge games. Time: 30 minutes to many hours Number of Players: 2 Scale: 200 meters per hex; units are platoons Playing Pieces: Not included (not playable separately) Playing Board: Not included (not playable separately) Rules: 10 scenarios Difficulty Level: 2 of 5 Solitaire Play: Excellent 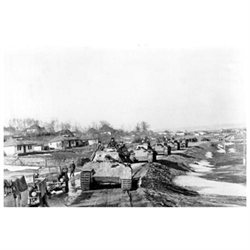