I am The Law 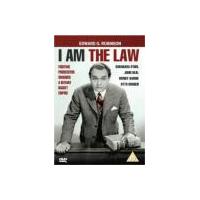 I Am the Law is arguably the best of the late 1930's films inspired by the racket-busting career of New York district attorney Thomas E Dewey. A feisty no-nonsense law professor Lindsay (Edward G Robinson) is approached by a group of concerned citizens to act as special prosecutor to rid their state of big-time lawbreakers.He wastes no time taking charge storming in to the prosecutors office and firing anyone whom he suspects of being on the take. With the help of his dedicated law students who work along side him for free Lindsay purges the local government of such corrupt influences as Eugene Ferguson (Otto Kruger) the outwardly respectable brains behind the racket.