The Men Who Built America

From obscurity to extraordinary &ndash; the ruthless story behind America&rsquo;s business giants. The United States of America wasn't discovered it was built. Rockefeller Vanderbilt Carnegie Astor Ford and Morgan - these are the men who built it and their names became synonymous with the American dream. At the height of the Industrial Age these men constructed a bold vision for a modern nation and transformed the greatest industries of our time: oil rail steel shipping automobiles and finance. Rising from poverty their paths crossed repeatedly as they elected Presidents set economic policies and influenced every major event of their day - from the Civil War to The Great Depression. This is the story of a nation at a crossroads and of the people who catapulted it to prosperity. Special Features: Bonus footage - From Rich to Richer The American Dream Monopoly Competitive Nature The Every Man The Rise of Cornelius Vanderbilt Traits of a Titan Carnegie 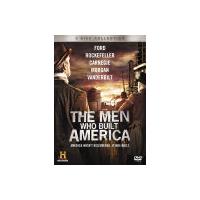