From the vaults of the legendary Hammer Film Productions come 5 classic movies, the cream of Hammer’s horror, science fiction and fantasy productions, featuring iconic performances from Peter Cushing, Christopher Lee, Bette Davis and many others.The Best of Hammer boxset includes renowned films such as early works The Nanny starring Bette Davis, which was the result of a sometimes uneasy collaboration between the legendary Bette Davis and two of Hammer’s greatest talents, writer Jimmy Sangster and director Seth Holt, this disturbing thriller was described by the Sunday Express as ‘riveting’ entertainment.The second film in the collection is Dracula Prince of Darkness which was directed by Terence Fisher in 1965 and marked Christopher Lee’s first return to his most famous role since the original Dracula in 1958. With a story originally screened by BBC television in 1958, Quatermass and the Pit was the final entry in the original trilogy of Quatermass stories by legendary writer Nigel Kneale. The film represents the directorial debut of acclaimed director RoyWard Baker(Scars of Dracula) and is one of Hammer’s most polished and thought provoking films.Frankenstein Created Woman was one of the last films to be completed by Hammer at the famed Bray Studios, and reunited star Peter Cushing (The Horror of Frankenstein, Beast Must Die) with director Terence Fisher (The Devil Rides Out, Dracula Prince of Darkness).The final film in the boxset was adapted from the bestselling novel by Dennis Wheatley, The Devil Rides Out which containes scenes of Satanism that proved controversial when the film was released in 1968. Now regarded as one of the greatest Hammer horrors, the film is a favourite of leading man Christopher Lee.This Best of Hammer boxset is a must have for all Hammer fans!Special Features:Audio commentary for The Nanny with writer/producer Jimmy Sangster, continuity supervisor Renee Glynne and Hammer Film Historian Marcus Hearn Documentary The Many Faces of Christopher Lee Theatrical trailers 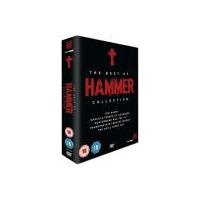