Season 1Leonard and Sheldon are brilliant physicists the kind of beautiful minds that understand how the universe works. But none of that genius helps them interact with people especially women. All this begins to change when a free-spirited beauty named Penny moves in next door. Sheldon Leonard's roommate is quite content spending his nights playing Klingon Boggle with their socially dysfunctional friends fellow Caltech scientists Wolowitz and Koothrappali. However Leonard sees in Penny a whole new universe of possibilities... including love. Season 2The science of funny is back! At work physicists Leonard and Sheldon and their geek pals conquer the cosmos. At home real life from dating to driving conquers them. This season Leonard gets a girl. So does Sheldon. (Sheldon?!) Howard drives the Mars Rover into a ditch. Raj woos a terminator. Gorgeous girl-next-door Penny falls under the spell of Age of Conan. And super-smart &uuml;berconfident Leslie Winkle reduces mere men to spineless jellyfish. Twenty-three laugh-filled episodes from series creators Chuck Lorre (Two and a Half Men) and Bill Prady (Dharma and Greg) and a talented cast with astronomical comedy I.Q.s show why Big Bang is such a big hit. Season 3Worlds collide in Season 3! A love affair with Penny has opened a big wide wonderful world of romance for Leonard. But Sheldon likes the world just the way it was thank you. All of which makes for a zany comic triangle with brainy clueless Sheldon and practical grounded Penny hilariously vying for the role of hypotenuse. This complete 3-Disc 23-Episode Season 3 Set also features Raj Howard tattoos football awkward dates jail time Stan Lee a The Lord of the Rings ring and all the fun of a series that only gets better. The Big Bang Theory has transformed from a cute comedy about eggheads and their hottie neighbor into an addictive ensemble piece that could be this decade's answer to Friends (Lynette Rice Entertainment Weekly). Season 4This season the Big Bang gang's romantic universe expands. On the rebound from Penny Leonard falls into the arms of Raj's sister Priya. Sheldon gets a girlfriend or rather a friend who is a girl: Amy a dour neurobiologist who declares herself besties with Penny. Howard and Bernadette heat up. And so do Raj and Bernadette (at least in Raj's Bollywood daydream). All in the furtherance of award-winning genius comedy. Season 5Regarding the opposite sex they're on a steep learning curve. In every other sense they're geniuses. Join physicists Leonard Hofstadter (Johnny Galecki) and Sheldon Cooper (Jim Parsons) as they ponder black holes chemical deviations girls and other mysteries of the universe in all 24 phenomenally funny episodes of Season Five. With Penny (Kaley Cuoco) and Leonard's relationship in uncharted terrain Sheldon Howard (Simon Helberg) and Raj (Kunal Nayyar) discover that the feminine mystique is something that cannot be easily graphed or calculated. As they muddle through relationship bugs and romance re-launches they also discover it's nothing a good roll of the D and D dice or a paintball tournament can't solve. Season 6Whether on or above Earth hilarity is outrageously universal in TV's most popular comedy featuring four forward-thinking but socially backward geniuses. Fun discoveries multiply: Leonard learns jealousy is bad for a relationship (with Penny) but science is good for seduction (of Penny). Howard finds life in the International Space Station life is no escape from terrestrial turmoil between his mom and his new wife Bernadette. Raj meets someone special who may be a good match if he can keep her from fleeing mid-date. And then there's Sheldon. He learns what not to say after facing harassment charges or competing for tenure at work and how Dungeons and Dragons can be the icebreaker his relationship with Amy needs. For those who need laughter with scientific regularity this 24-episode Season Six set of The Big Bang Theory will rock your cosmos. Season 7Leonard and Sheldon are brilliant physicists - wizards in the laboratory but socially challenged outside of it. Enter beautiful street-smart neighbour Penny who aims to teach them a thing or two about life.Despite their on-again off-again relationship in the past Leonard believes he's found true love with Penny. Even Sheldon has found a female companion - entering into a Relationship Agreement with neurobiologist Amy Farrah Fowler. In their free time Leonard and Sheldon continue to enjoy frequent trips to the comic book store and fantasy role-playing games with their ever-expanding universe of friends including fellow scientists Raj and Howard and Howard's adorable microbiologist wife Bernadette. 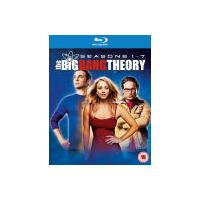