The Lost Boys Brothers Michael and Sam move to their grandfathers house in a town nicknamed 'The Murder Capital of the World.' Michael gets involved with a hell-raising motorcycle gang of vampires. But when Sam becomes involved with undercover Vampire hunters he realizes they must save Michael and the rest of the town from the vampire gang. The Lost Boys 3 As the lost boys and girls of San Cazador prepare to party under the Blood Moon an alpha vampire conspires to turn these unsuspecting ravers into an army of undead. The only thing that stands between him and the annihilation of the entire human race is the infamous vampire fighting Frog Brothers. Armed with double-barrel holy water balloon launchers and multi-arrow crossbows Edgar (Corey Feldman) and Alan Frog (Jamison Newlander) join forces to kick some blood-sucker butt in this latest high-energy action packed adventure in the Lost Boys franchise. 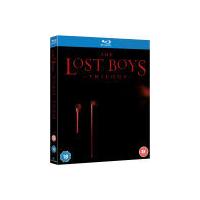