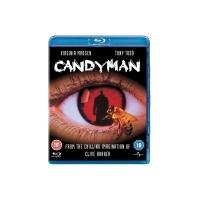 All Regions blu-ray release, playable on any blu-ray player anywhere in the world!Based on a story by Clive Barker and skillfully written and directed by Bernard Rose, Candyman rises above most horror films by eerily suggesting that some urban legends--in this case a particularly frightening one--have a spooky basis in reality. The legend of the Candyman is a potent one around the high-rise tenements of Chicago's Cabrini-Green housing complex, where the residents speak of a dark, ominous figure who appears when his victims say his name five times in front of a mirror, then mercilessly slashes them to death. Upon learning that the Candyman is rumored to live in one of the vacant tenements, a University of Illinois researcher (Virginia Madsen) investigates a recent murder at Cabrini-Green. She learns that the Candyman (played by Tony Todd) is both unreal and chillingly real--a supernatural force of evil empowered by those who believe in his legend. He is a killer made flesh by the belief of others, and the young researcher's investigation is a threat to his existence. What happens next? We wouldn't dare spoil the chills, but rest assured that writer-director Rose has tapped into a wellspring of urban angst and fear, and Candyman serves up its gruesome frights with a refreshing dose of intelligence. --Jeff Shannon