Dr. Dolittle: Treat yourself to a healthy does of Eddie Murphy's untamed animal magnetism in the smash hit comedy! A successful doctor and devoted family man John Dolittle (Murphy) seems to have the world by the tail until a long-suppressed talent he possessed as a child - the ability to communicate with animals is suddenly reawakened&hellip; with a vengeance! Now every creature within squawking distance wants the good doctor's advice unleashing an outrageous chain of events that turn his world upside down! Featuring an all-star menagerie of voice talent (including Chris Rock John Leguizamo Norm MacDonald Albert Brooks Garry Shandling and Ellen DeGeneres) this wild and woolly free-for-all is your prescription for hilarious hijinks and fun! Dr. Dolittle 2: Superstar Eddie Murphy is back with a hilarious sequel to the blockbuster hit Dr. Dolittle. Now his ability to talk with the animals lands him in a race against time to turn a circus bear into an irresistible lover and win the heart of an endangered bear. The future of the forest and his animal friends depends on his success! Dr. Dolittle 2 is a delightful comedy adventure you won't forget. And it's guaranteed to drive your family wild with laughter. Cheaper By The Dozen: Comedy superstar Steve Martin (Bringing Down The House) and the film favourite Bonnie Hunt (Jerry Maguire) team up in this hilarious tale of two hard-working parents trying to manage careers and a household - amid the chaos of raising twelve rambunctious kids! With a crowd-pleasing supporting cast including rising young stars Hilary Duff (Lizzie McGuire) Tom Welling (Smallville) and Piper Perabo (Coyote Ugly) this heart-warming comedy delivers super-sized fun and laughs by the dozen! Cheaper By The Dozen 2: Steven Martin is funnier than ever in this hilarious sequel! Tom Baker (Steven Martin) and wife Kate (Bonnie Hunt) bring their clan together for a memorable summer getaway. But their dream holiday turns into an outrageous competition with the overachieving overzealous family of Tom's long-time rival Jimmy Murtaugh (Eugene Levy). Featuring all the original Baker kids including Hilary Duff Tom Welling and Piper Perabo this supersized comedy is fun for the whole family! 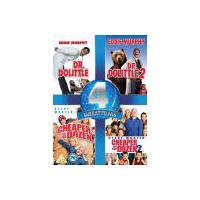