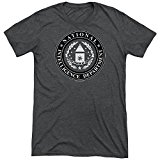 Officially Licensed Printed here in the USA Pre-Shrunk to Minimize Shrinkage There may be a slight Vinegar scent as part of the print process. It will disappear after the 1st wash. Semi-fitted Silhouette, Double Needle Bottom Hem and Sleeves Sized in Mens Stargate Sg 1 is a tv series that follows up on the hit feature film, Stargate. It revolves around a secret military team known as SG1, that is formed to explore the recently discovered Stargates that take human's to many different world. If you?re a fan of this or any Stargate film or series, you will love this licensed Stargate SG1 product.