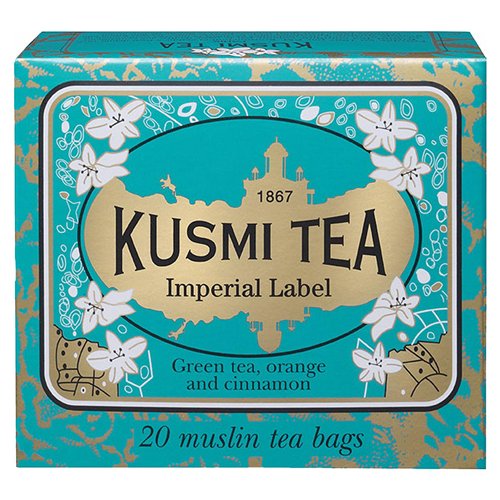 Founded in 1867 in Saint-Petersburg, Kusmi Teas are faithful to the spirit of the firm P.M Kousmichoff, supplier of the tsars of ancient Russia.

Founded in 1867 in Saint-Petersburg, Kusmi Teas are faithful to the spirit of the firm P.M Kousmichoff, supplier of the tsars of ancient Russia. In 1917 when the Revolution started in Russia, anticipating a disaster, the eldest Kousmichoff son transferred a part of his fortune to the London office and then created the Kusmi Tea company in France, based in Paris at 75 avenue Niel, where the company still has its workshop and boutique.Kousmichoff has been carrying on the same tradition of serving connoisseurs and gourmets, combining discerning taste and creativity. Well known for their superb flavor and smoothness, they are distributed throughout the world in the most fashionable and exclusive places. Kusmi teas share all the complexity and subtlety of ancient Russia.The Imperial Label blend is a Chinese green tea, which blends Sencha-Tea with orange, cinnamon, liquorice and sea-buckthorn. It has been developed exclusively for the famous label of cosmetics Kiehl?s from New York inspired by the Imperial Body Balm Label, a deeply hydrating and generating balm with high levels of antioxidant-rich butters that help to protect skin from environmental damage.The sea-buckthorn berries are rich in oils and vitamins and make the Imperial Label blend an ideal wellness-drink for the whole day. Thanks to the green Sencha-Tea, this recipe is also rich in antioxidant. Its flavor mainly offers a taste of orange and cinnamon, the sweetness of liquorice and refreshing elements of lemon and sea-buckthorn.Each package of Kusmi Imperial Label Tea Bags contains 20 muslin tea bags.