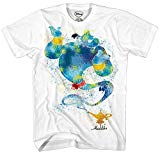 Mens Adult Sizes, White 100% Cotton Machine wash cold with like colors. Tumble dry low. Aladdin is a 1992 American animated comedy musical romantic fantasy adventure film produced by Walt Disney Feature Animation for Walt Disney Pictures. The film is the 31st Disney animated feature film, and was the fourth produced during the Disney film era known as the Disney Renaissance. It was directed by John Musker and Ron Clements, and is based on the Arab-style folktale of the same name from One Thousand and One Nights and the French interpretation by Antoine Galland. The voice cast features Scott Weinger, Robin Williams, Linda Larkin, Jonathan Freeman, Frank Welker, Gilbert Gottfried and Douglas Seale. The film follows Aladdin, a street urchin, who finds a magic lamp containing a genie. In order to hide the lamp from the Grand vizier, he disguises himself as a wealthy prince, and tries to impress the Sultan and his daughter.