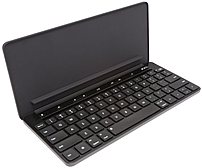 With the Microsoft P2Z 00001 Universal Mobile Keyboard, getting stuff done while you're on the go has never been easier

Power through emails, put together a proposal, or instant message with a friend. It doesn't matter if you're on your tablet or your smartphone the Universal Mobile Keyboard was designed to work with iPad, iPhone, Android devices and Windows tablets. Pair with up to 3 devices with different operating systems and easily switch between them. The compact and light weight design of the Universal Mobile Keyboard was built with portability in mind with its protective cover and built in stand that holds your tablet or smartphone. Just flip the cover open to power up and make a Bluetooth connection, then set your device into the integrated stand you'll be typing in seconds. Shutting down is just as fast.