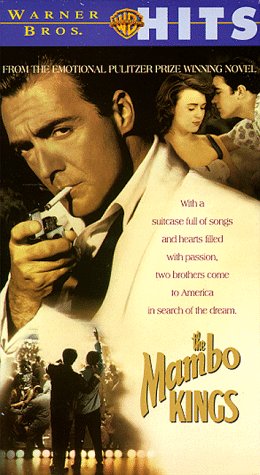 This period drama is hot, hot, hot. Stylish and sexy, it is adapted from the Pulitzer Prize-winning novel, The Mambo Kings Play Songs of Love, by Oscar Hijuelos, the story of two brothers who flee from Cuba in the early 1950s, heading for New York. Hoping to make a name for themselves as famous musicians, the duo face hardships and painful discoveries along the way. Armand Assante is the older of the two, with a smoldering Antonio Banderas as his younger, more impetuous brother. (In his first English-speaking role, Banderas delivered all of his lines phonetically.) The pulsating, sweaty energy of the first half of the film is not sustained throughout. Partly this is because a movie about the rise and fall of minor celebrities has been done to death. Even when the action slows down, however, the story does not bore. There is too much sensuality and vitality exuded by both Assante and Banderas. --Rochelle O'Gorman