An original and delightfully gruesome slasher film, Saint reimagines jolly old Saint Nick as a bloodthirsty bishop fulfilling a grisly prophecy every 32 years under the Christmas full moon. The film's titular saint was in fact a murderous medieval marauder, ultimately slain by the villagers he tormented, only to swear a ghostly revenge on their descendents every December 5 the anniversary of his death. Centuries later, the story has settled comfortably into innocuous folklore, until a bloody encounter with the ghoul himself forces local teen Frank to believe in Santa all over again. Teaming up with a fellow believer, discharged conspiracy-theorist cop Goert, it will be up to Frank to save the city of Amsterdam in an all-out bloody battle against the wrathful "Sinterklaas" and his minions. Dick Maas, the director of classic Dutch horror films The Lift and Amsterdamned, delivers a fun chiller full of creative yuletide horror played out across the decked halls (and roofs) of snowy Amsterdam justly earning Saint's spectacle of thrills, chills, and kills the title of highest grossing Dutch film of the year.

If you're not sure about watching this movie the only thing I can say is DO IT! If you don't take things too seriously and enjoy horror with a touch of comedy this is a great film. Decent production values, a great script, nice sfx and decent acting. I love this one, watch it every Christmas!
CherryLex (Florida)
( 01/05/16 )

One of my favorite Christmas movies! It gets pretty violent, but from what I remember there isn't too much gore happening. It's just someone's fun idea of what an evil Saint Nicholas would look like. Worth a watch.
Simon Traynor
( 09/28/18 ) 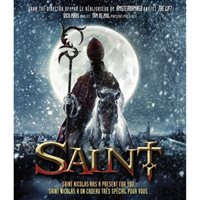