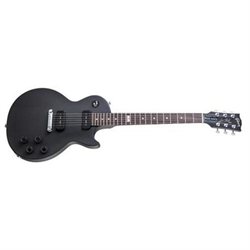 The 2014 Les Paul Melody Maker offers incredible value with the innovation and high-quality craftsmanship you ve come to expect from Gibson over the past 120 years.

The 2014 Les Paul Melody Maker offers incredible value with the innovation and high-quality craftsmanship you ve come to expect from Gibson over the past 120 years. In honor of Gibson s 120th Anniversary, Gibson is proud to present the stripped-down, straight to the point Les Paul Melody Maker which may be slimmer in size but is anything but slim when it comes to tone.The 2014 Les Paul Melody Maker is crafted from the traditional tonewoods that made these instruments legendary, with a solid mahogany back topped off with carved maple, except they re constructed into a thinner body profile to offer player a lightweight alternative to some of the notoriously heavy Les Paul models for enhanced player comfort. The glued-in neck is carved from maple into the comfortably, rounded 50s profile and a rosewood fingerboard that sports 22 corrosion-resistant, cryogenic-treated frets, a part of Gibson 120th Anniversary features, for incomparable fret life plus dot position inlays and a commemorative 120th Anniversary inlay at the 12th fret.Under the hood is a set of Gibson P-90S bridge and neck pickups built in the image of legendary P-90 pickups. Made with genuine Alnico pole pieces, The Les Paul Melody Maker captures that coveted P-90 single-coil tone with enhance clarity, depth and dynamics. Holding true to its predecessors, the pickups on the Les Paul Melody Maker are routed through the traditional control complement, with an independent volume and tone control for each pickup and a 3-way pickup selector switch.This Les Paul Melody Maker has everything you need, and nothing you don t it wears no pickguard and features a satin chrome lightning bar wraparound tailpiece for incredible sustain and resonance while the vintage-style white-button tuning machines cater to the Melody Makers retro appearance. The Les Paul Melody Maker also benefits from Gibson s 120th Anniversary features which includes enlarged, no-slip strap buttons to keep your guitar fu