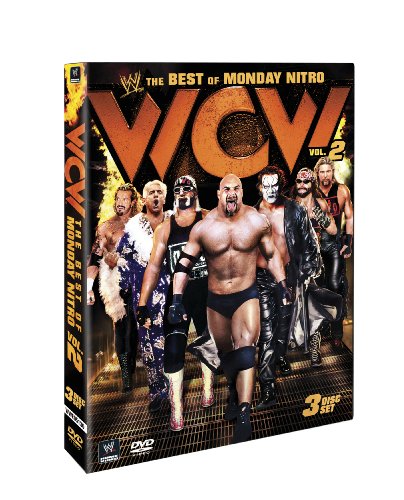 For six years WCW Monday Nitro went head-to-head with WWE Raw pulling out all the stops to gain the upper hand in the escalating Monday Night War. The place "where the big boys play" produced such a wealth of non-stop thrills action drama and controversy that we could not possibly scratch the surface in one volume. Host Diamond Dallas Page returns to present Volume 2 of the wildly successful Best of WCW Nitro series. Sports entertainment fans will relive eight more hours of the poisonous n.W.o electrifying cruiserweights and unparalleled star power that delivered an endless supply of timeless matches and moments. All the greatest WCW stars are included such as Ric Flair Hulk Hogan Sting Kevin Nash Rey Mysterio Eric Bischoff Goldberg and more. Plus check out the Nitro Girls Nitro parties WCW's spring break bashes celebrity integration and several matches never-before-released on DVD

Picked up a copy at the local store, here's a summary of my thoughts, for the full review check out Tribalwrestling website.Does the product live up to the hype of "The Very Best of"? The answer is : Almost but not quite. The filler matches prevent it from being a great release (4-5 stars level).The GoodBest of WCW Nitro Volume 2 is better than volume 1. First off, there's no terrible stuff on the "Very Best of" this time around. There seem to be less effort to 'bury' the former rivals of WWE. So that'..
Robert - See all my rev..
( 02/12/13 )