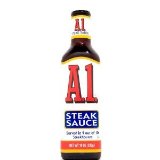 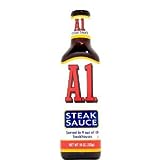 Use it as a marinade, brush it on while grilling or just pour it on at the table. Served in 9 out of 10 USA Steakhouses !! 3 pack Traditional thick sauce, seasoned with a robust blend of spices and seasonings is great when served with any type of meat, poultry, seafood or vegetable recipe. It also tastes fabulous when used as a flavour enhancer for stews, sauces and casseroles. The original steak sauce upon which A1 is based was created in 1824 by Henderson William Brand, chef to King George IV of the United Kingdom. It went into commercial production under the Brand & Co. label in 1831, and continued in production under this label until bankruptcy forced ownership of Brand & Co. to be transferred to W.H. Withall in 1850. It was renamed A1 in 1873, after a trademark dispute between creator Henderson William Brand and Dence and Mason, who had since since purchased Brand & Co. from Withall. It was then introduced to the United States under the ownership of G.F. Heublein & Brothers. Ownership of A1 passed to R.J. Reynolds in 1982, after it merged with Heublein & Brothers, and then in 1985 to Kraft Foods, after it merged with the Reynolds company. Kraft was purchased by Philip Morris in 2000 who retains ownership, and US manufacturing of the product is currently being done by Kraft Foods, part of Philip Morris's holdings.