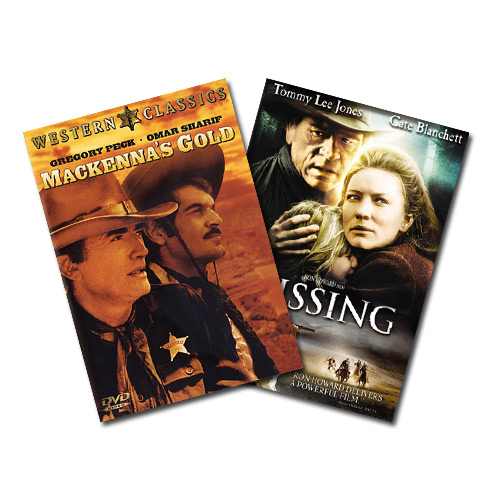 Contains two of the greatest westerns ever made, MACKENNA'S GOLD and THE MISSINGMACKENNA'S GOLD: Gregory Peck and Omar Sharif battle to find a legendary cache of gold in this spectacular Wild West adventure. In the Arizona Territory of the 1870s, Marshal Sam MacKenna (Peck) is the only living person who knows the tortuous route to the fabulous Canon Del Oro . During his journey, MacKenna is captured by Colorado (Sharif), a brutal Mexican bandit who has long sought his death. But if MacKenna is to lead the cutthroat gang to the lost treasure, Colorado must keep him alive. En route, MacKenna and the outlaw band are joined by renegade soldiers, vengeful indians, cold-blooded killers and gentlemen from town. As they near the golden canyon, all but MacKenna are swept by a sudden fever - the naked greed for gold. MacKenna's Gold is one of the most exciting Westerns ever made.THE MISSING: The Oscar-winning team of Ron Howard and Brian Grazer (2001, A Beautiful Mind, Best Director, Best Picture) present a riveting, spine-tingling thriller destined to become a classic! Academy Award-nominee Cate Blanchett (1998, Elizabeth, Best Actress in a Leading Role) is Maggie, a young plainswoman raising her daughters in the desolate wilderness of New Mexico. When daughter Lily (Evan Rachel Wood, Thirteen) is snatched by a dark-hooded phantom with shape-shifting powers, Maggie's long-estranged father, Oscar-winner Tommy Lee Jones (1993, The Fugitive, Best Actor in a Supporting Role) appears suddenly, offering help. Though stunned by his return, Maggie knows she must swallow both hurt and pride if she is ever to see Lily again. Unaware of the frightening events that lurk in the distance, father and daughter set out to track down the fiend that took Lily. But lying in wait is horror so unspeakable it will change them forever!