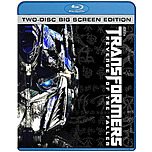 Introduction The Fallen, formerly known as Megatronus Prime, is one of the Seven Primes, founder of the Decepticons, and the master of his apprentice Megatron

Br br Two years after he and his Autobot friends saved the Earth from the Decepticons, Sam Witwicky Shia LaBeouf faces a new battle college. Meanwhile, Optimus Prime and the Autobots are working with a secret military organization and trying to make a home for themselves on Earth. When an ancient Decepticon known as The Fallen rises up to wreak vengeance, Sam and his girlfriend, Mikaela, must figure out the history of the Transformers on Earth and find a way to defeat The Fallen once and for all. br br