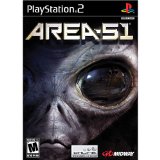 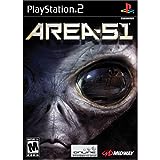 Arm yourself with 10 human and alien weapons as you explore dark and menacing corridors Discover the real answers behind such conspiracy theories as the alien autopsy and faked lunar landing Take the action online and set up matches with your friends Area 51 is a great aracde shooter that's bringing its action and challenge home to you. You'll lead a special unit into the famous Area 51 and discover just what's really lurking in that mytserious, classified desert base. An infectious mutagen has given players alien-enhanced physical abilities but is slowly transforming them into an alien. They must find the cure before it's too late and their humanity is lost. Face off against a horde of horrific creatures - and secure Area 51! After the smash success of the arcade version of Area-51, Midway Entertainment has answered the calls for a console version of the game. With a cool, sci-fi storyline that includes terrifying aliens and mutants, and the sickest arsenal of human and alien weaponry imaginable, Area-51 is a gory, first-person shooter loaded with action. Area-51, also known as Groom Lake, is a secret military facility about 90 miles north of Las Vegas. The name refers to a large, six-by-ten mile block of land that contains a covert, U.S.-military air base. The government refuses to comment on the nature of this air base, and since the 1950s, Area-51 has been a hotbed of UFO conspiracies and rumors of governmental cover-up. Now, because of a catastrophic viral outbreak, all the secrets are about to be blown wide open and only you -- Ethan Cole, HAZMAT Specialist -- can control the chaos, contain the outbreak, and save planet earth. The research facility at Area-51 has been shut down because of a viral outbreak. The distress signal received by the U.S. Army has activated the automatic quarantine procedures, locking all scientific and military personnel inside. It will be your mission to dive into five massive levels within the secret confines of the mysterious Area-51 to try to keep the virus contained. Stacked with an arsenal of human and alien weapons, you will battle scientists and military personnel who have been infected by the outbreak, as well as an ancient colony of aliens buried deep beneath the facility. Along the way, you will also unearth chilling conspiracies, such as the infamous extraterrestrial crash at Roswell and the faked lunar landing. Once you've mastered the weaponry and completed your mission, you can take your skills to the global level and compete with others HAZMAT Specialists online with your PlayStation2. With cool guns, fast-paced action, and fun gameplay modes, Area-51 delivers awesome single-player and multi-player action.